The coastline of Puerto Rico, is a unique place showing the relationship between the ecosystem and the different organisms that depend on it to survive. An ecosystem means a community of plants and animals that interact between themselves and the environment.:

In Puerto Rico there are many ecosystems of which 7 of them (Rain Forest, Dry Forest, Sandy Beach, Rocky Shore, Coral Reef, Sea Grass Bed, Mangrove Forest & Lagoons) are the more predominant and important to the Island. Of the 7 ecosystems, 5 of them are on the classification of Coastal and Marine Environment.

The understanding and knowledge of the process and balance that nurture our marine resources help us understand the importance to conserve, preserve and protect our coastal and marine ecosystems.

Sandy beaches are the most visited and accessible coastal system in Puerto Rico. All around the Island we have different beaches with different characteristics such as colors, sand texture and wave action. For that reason people tend to visit diverse areas for different purposes: relaxing, surfing, snorkeling, hiking, fishing, etc. But human recreational use is not just the only reason that we value sandy beaches; there is a lot more to it. 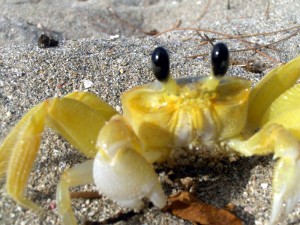 In most of the sandy beaches of the north coast, sand dunes are present. These dunes provide a natural barrier to prevailing winds allowing vegetation, thereby establishing mini ecosystems of animal and plant life that wouldn’t exist without them. Sand dunes mark the limit between the land and the sandy beaches, also there are critical in providing protection against hurricanes waves, erosion and floods.

Some of the animals that depend on the sandy beaches to survive are the ghost crab, turtle, hermit crab, sand dollars, nine-armed sea star, segmented worms and much more.

Seagrass are plants that have roots, stems, leaves, flowers, fruits and seeds adapted to live on the sea floor. They live close to the shore and at deeper depths were sunlight penetrates. The seagrass grow better in sandy and muddy sea floor rich in organic material and calcium carbonate. 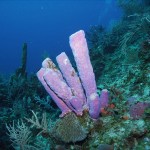 Some of the types of sea grass that we find in Puerto Rico are known as Turtle Grass (Thalassia testudinum) and Manatee Grass (Syringodium filiforme). There are sea grass beds all around our Island, but the more predominant areas exist on the East and Southern Coasts. 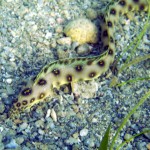 Other fish like juvenile snappers, lobsters and conch inhabit the sea grass bed underlining the importance that the sea grass environment has in the marine and coastal food chain.

Lastly, sea grass stops coastal erosion and helps maintain the quality of the water by controlling sedimentation that is so harmful to the coral reef.

Without the mangrove forest the seas would be barren, for the mangroves are the roots of the sea. Mangroves are hardy shrubs and trees that live along the seashore in tropical and subtropical regions with the ability to tolerate tide change by seawater. Mangrove and sea grass beds provide the key to the productivity of the tropical ocean. Mangrove forests are one of the most diverse eco environments to be found in Puerto Rico. The name “mangrove” is derived from one of its index plants Rhifizophora mangle (red mangrove tree). These trees have been considered land builders, generating buffer zones between the land and sea. 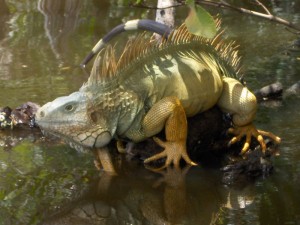 Puerto Rico has four types of mangrove trees, each of them with a different and unique adaptation to live and tolerate the salinity of the sea. Some trees tolerate more salt than others and thrive in different zones inside the same forest.  When these defined zones are in evidence the hardiest and closest to the sea is the red mangrove (so called because the plant releases nutrients that turn the water red), next, further inland is the black mangrove, third is the white mangrove and fourth, the button wood mangrove.

The mangrove is a varied ecological system unto itself: the branches of trees where sea birds nest, the terrestrial roots where crabs and mollusks thrive and the submerged roots where a multitude of aquatic sea life exist such as sponges, anemones, clams, segmented worms, tunicate and a great variety of fish. The mangrove forest is the nursery for most of the animals of the sea.

The corals in the sea are comparable to the giant trees in the rainforest because both make homes for an incredible diversity of organisms of all forms. Thus coral reefs are the most reproductive system in the marine environment.

Coral are living organisms that live inside a limestone skeleton (calcium carbonate) that they construct. Corals, like other organisms consume nutrients. There are different kinds of corals of all shapes and class. 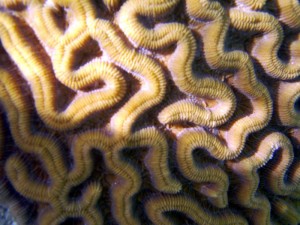 There are tropical reef-building corals (hermatipic corals), and the corals found worldwide that do not form reefs are ahermatypic corals. Reef building coral has in its tissue small living symbiotic algae know as zooxanthellae, which ahermatypic corals do not have. These small algae allow the coral to deposit calcium carbonate much faster.

Coral reefs occur in different sizes and shapes, resulting from particular hydrological and geological conditions in tropical seas. There exist at least three type of reefs: atolls (a coral reef that develops as a ring around a central lagoon), barrier reefs (coral reef adjacent to landmasses and separated from them by a lagoon or channel of variable extent), and fringing reefs (a coral reef that develops as a narrow band close to the shore).

Corals are closely related to sea anemones and jellyfish, but only live as polyps. The polyps are the little coral animals that live in small cups or corallites on the hard skeleton and build the coral reefs.  They look pretty much like sea anemones, and with their tentacles they capture food, especially zooplankton (planktonic animals), during the night. The coral lives in simbiosis with a microscopic alga (zooxanthellae) that lives inside the polyp, in their tissue. These algae nourish the coral, because they do photosynthesis, passing organic matter to the coral, giving nourishment. 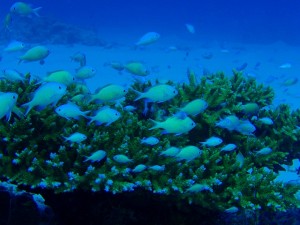 There are other tropical corals, although abundant, do not help build the reefs on a great scale. Nearly all are soft corals such as sea fans.  Other soft corals like the Gorgonians may be hard skeleton but contribute little to reef formation as they are made mostly of protein.

Depth is another important factor for a proper development of coral reefs. This is due to the light requirement of hermatypic coral as they need plenty of light for the small algae inside the coral tissue to generate photosynthesis. Reduction of photosynthesis inhibits their ability to deposit the calcium carbonate to produce the reef.

A rocky shore is defined as the part of the coast that is solid and stable with a compound of rocks exposed to the punishment of waves. The rocky shore is a unique ecosystem with its specialized plant and animal inhabitants. This part of the coast may vary depending in which part of the island they are found. Rocky shores may contain cliffs or sloping terrain with features such as canals, caves, inlets and blow-holes formed by the constant erosion of waves. The rocky shores of Puerto Rico may be of eolionite (consolidated sand dunes) more predominate on the North, in the East dominate the igneous rock, and in the South and Western coasts of the Island prevail the calcareous rock. 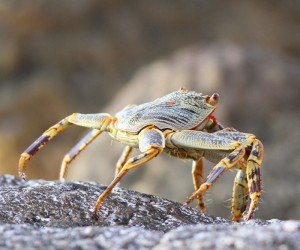 Erosion is constantly taking place. It is caused by wind and wave action, which also carries the eroded material out to sea, and the living organisms on the rocks. The stronger the wave action, the more marine life exists.

Puerto Rico’s rocky shores are home to a vast diversity of organisms such as mollusks (snails, chiton, octopus), crustaceans (crabs, barnacle), echinoderms (sea urchin, cucumbers), cnidarians (anemones, coral), algae and segmented worms. All these sea-life species have adapted and thrive in what may be considered harsh, adverse, environmental conditions.

HELP US FIGHT THE LIONFISH 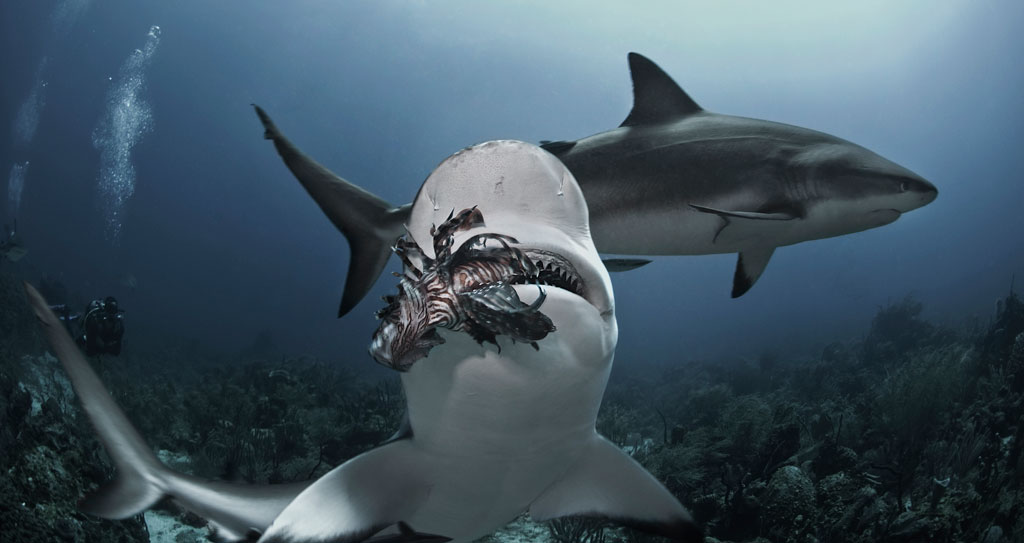 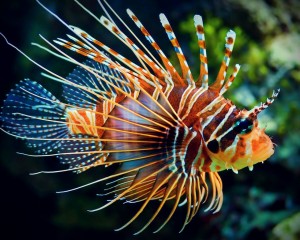 Global warming and its’ effects are increasing coral diseases and coral bleaching, in addition, overfishing and poor tourism management techniques are a major threat to the reefs as well.

But now, in this decade, the coral reefs and its balance find themselves in severe danger with the invasion of the Lionfish Pterois volitans and Pterois miles. Originally from the Indo-Pacific, the Lionfish that can grow up to 15 inches, weighting about 2-3 pounds & has a life span of 15 years. 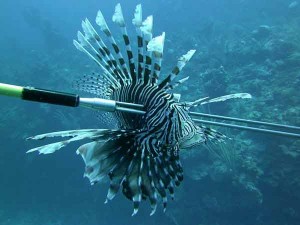 This is devastating for any reef fish population. Studies emphasize the voracious diet of the Lionfish as the juveniles of the species mostly consume huge quantities of invertebrates and when mature they eat almost any kind of fish. They basically eat all in their way destroying the balance and biodiversity in any Caribbean reef.  Sadly for the Caribbean and Atlantic waters, the introduction of the Lionfish and its reproductive cycle has been very successful. Lionfish have few if any predators allowing their population to grow unchecked.  Breeding females have been caught in Caribbean waters each bearing up to 20,000 eggs per spawn.  They have been found to spawn every four days. This is an alarming rate!

The presence of Lionfish reduces the population of fish that eat algae on the coral reefs; as a consequence the reef itself is at risk due to unchecked algae growth causing an ecological unbalance allowing the algae overgrowth to suffocate corals, and blocking the growth of new of coral.

Since the Lionfish is not native to the Caribbean, natural predators to control its population are not present.  This means that is we do not ACT NOW AGAINST THE INVASION, soon the Lionfish will dominate the reef and take away all its uniqueness. There have been reports in the Bahamas as well as in Cozumel, Mexico; where the Lionfish have taken over reefs starting with only one Lionfish and rapidly reproducing to a dozen specimens in10 square feet! Puerto Rico’s coral reefs cannot afford this kind of reef devastation caused by the Lionfish. 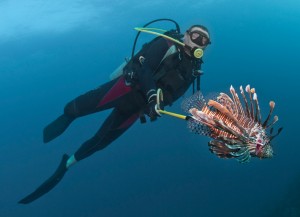 The Lionfish is highly territorial, once seen in a specific spot it will be normally inhabit the area for up to two weeks.

RECOMMENDATION
Be careful when handling a Lionfish, remember that they have poison in their fins and spines! If you get stung by the Lionfish, apply heat as fast as you can in the affected area and seek medical attention. 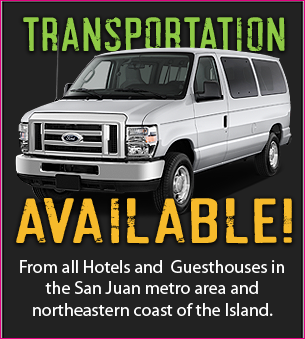 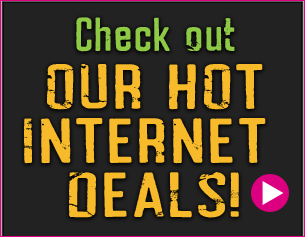